The Trends on Thursday: Big in Milan 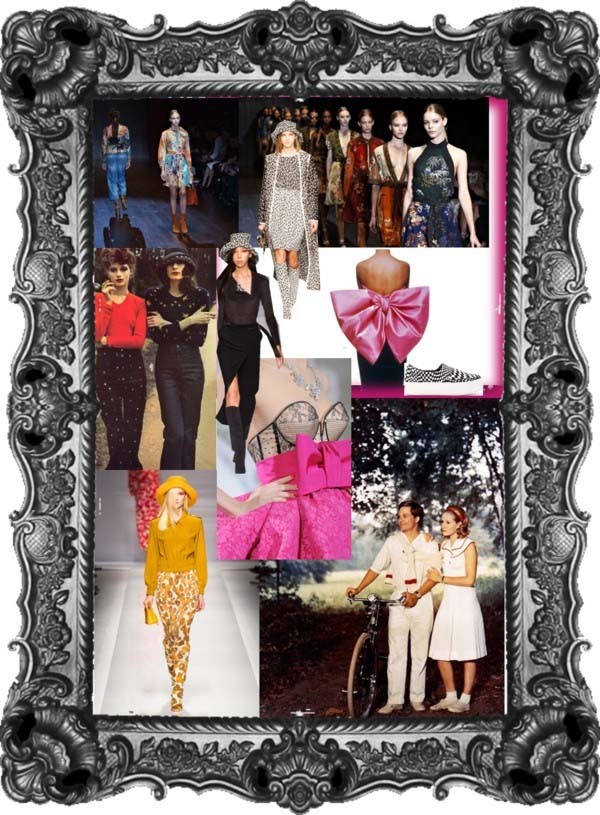 Fashion's getting real, putting comfort first and channelling a sense of practicality that ensures women wear the clothes- the clothes don't wear them. How, then, does fashion's glamour capital cope with a brief like that?

Thoughts outside the box flared outwards  in early 70s-style with A-line skirts and outward draping beneath a high waist at Emilio Pucci. Taking the vintage sportswear look to the, erm, max was MaxMara, with sartorial reference to the 1970 film, Garden of the Finzi-Continis and their own 1971 campaigns that starred Angelica Huston.

Another dominant silhouette was the bouquet-tied waist, an oversized, structured feature that recalled the drama of Yves Saint-Laurent and Dior's hot pink waist bows. Bows are one among many things that can give a DIY fashion enthusiast like me a frisson, but this brilliantly edgy take could be tricky to get right and not be made to resemble a first-term art foundation year project!

If 2015 will be the season - another season - when fashion comes back down to earth with flat shoes and such like, Milan's two cents ( with considerably higher price tags) would be the coat as a centrepiece. Sensible - for a season set to go on sale in late January! Highlights of the trend were intricately detailed efforts at Prada, as well as duster coats, deconstructed trench coats and (yet more) 70s style in the form of safari jackets at Bottega Veneta, Salvatore Ferragamo and Missoni. While we're on the subject of appealing to that normcore lot, hair styling also forewent fussiness in favour of the humble pony tail, with wispy front tendrils that make you look as though you've been swept through the wind - or the wrong side of 1999 during your formative teenage years! Not that any spring 2015 shows in a fashion capital could be complete without their take on flats, so what was the order of the day in Milan? Luxurious and ornate takes on skater and pool shoes - case in point: crystal-studded pool sliders at Fausto Puglisi.

Sparkle and glamour were everywhere with brocade at Prada, appliqué and crystal-studded jeans at Dolce & Gabbana and Swarovski crystal-covered 'daywear' at Versace. Where else?

Another area of focus was at the thighs. Even if - like with me -they weren't your favourite part of your body, there was something for everyone, with the dichotomy of upper-thigh exposure (with sheer-panelled skirts at Versace and Roberto Cavalli and lace at Dolce & Gabbana) and the relaxed drape of culottes, epitomised with exoticism at Gucci.

Nothing left to say, except that Barbie made an appearance at Moschino, in a return to Americana, following their fast food outings. Why not?
Posted by ChicCheatCharley at 13:27