The Trends on Thursday: Army of Hues 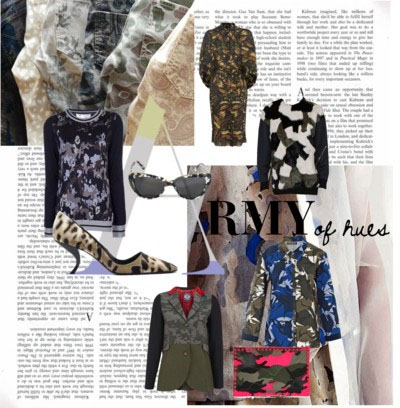 Army of hues by chiccheat featuring a camo jacket
Once again fashion invites us to stand out in patterns inspired by the art of blending in.


Ever since its common use and term coinage in World War 1, it has caught the imagination of endlessly renewing generations in fashion, from the outré black and white clothing of the Dazzle Ball of 1919 (in patterns not unlike those we've seen revived in recent seasons) to the anti-war protest regalia of the 60s and a nonchalant flash in the pan of 90s grunge, that rather complimented a pair of black Dr. Martens. Fashion addicts of my age may also recall the appearance it made on the easy-to-copy bandwagon of the pop circuit before the turn of the millennium.


Its enduring appeal of patterned disorder has captured the imaginations of artists and designers from Ian Hamilton Finlay to John Galliano in his heyday at Dior. But we must never get stuck so superficially on the ice floe of generalised symbolism. The combative rebellion aspect is merely a one-sided interpretation - a single paradigm among the complex signs of fashion. Every trend and iteration had its unique context, angle - zeitgeist, if you will. Put simply, it ain't what you say...


The class of 2013 is seeing a softer, more feminine incarnation from the colourful Warhol-like prints at Christopher Kane to the playful patchwork of fur at 3.1 Phillip Lim. The fabrics, the colour palette and the quirky, inventive detailing set the new breed apart, so that no-one need think we're still living through the great combat trousers fixation of 1998 (All Saints is a global fashion label now, not an embarrassing pop trend instigator!) or rifling through a charity shop for an army surplus backpack. Let it never be said that chaotic patterns and feminine elegance should be conflicting subjects!

Posted by ChicCheatCharley at 15:42 No comments:

A Tribe Called Equestrian: How to DIY a Pixie Market Lace Horse Top

Just horsing around with the up -and-coming lace and applique trends! 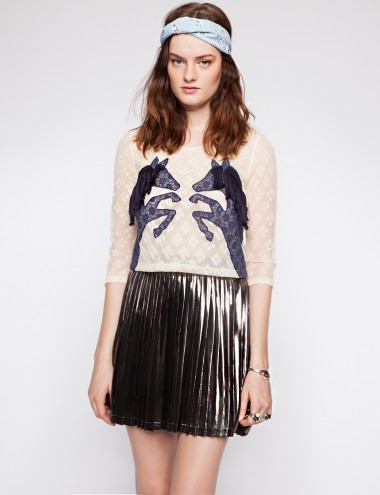 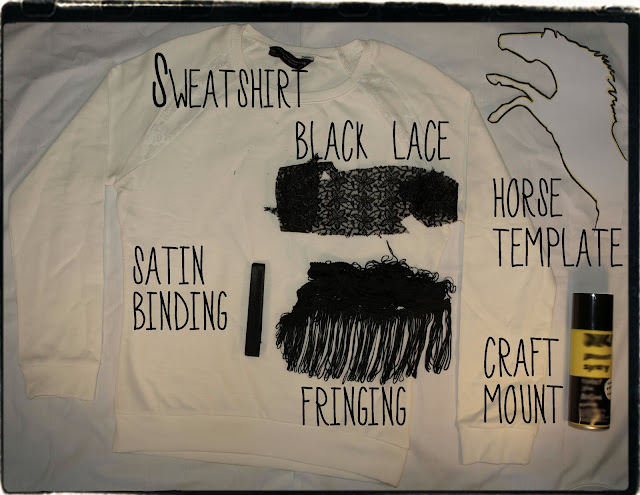 ...and a sewing machine.

Well, I presumptuously say easy. It does involve sewing and requires a reasonably steady hand but if you've got those skills down, this one's a straightforward evening's-worth of a DIY.

A few hours - I slacked off big time and was very distracted so I'd say 2-3 hours, tops. 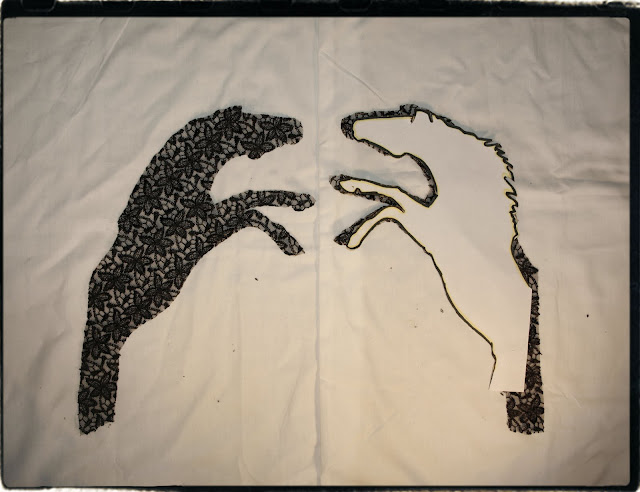 Print out the horse template to A4 size, cut out the edges and cut the shape out twice in lace. 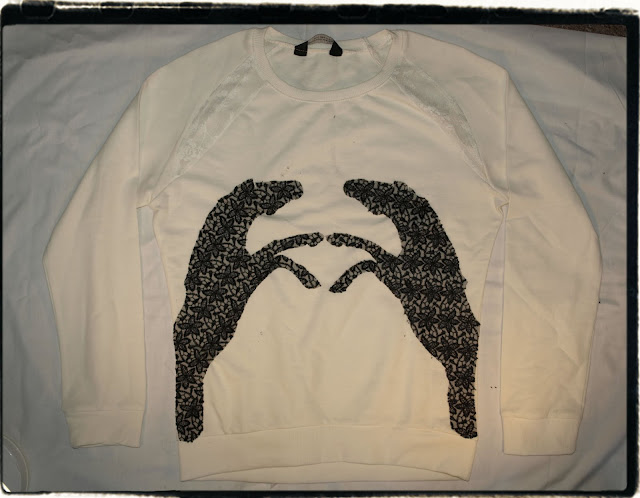 Craft mount the lace shapes to your sweatshirt. 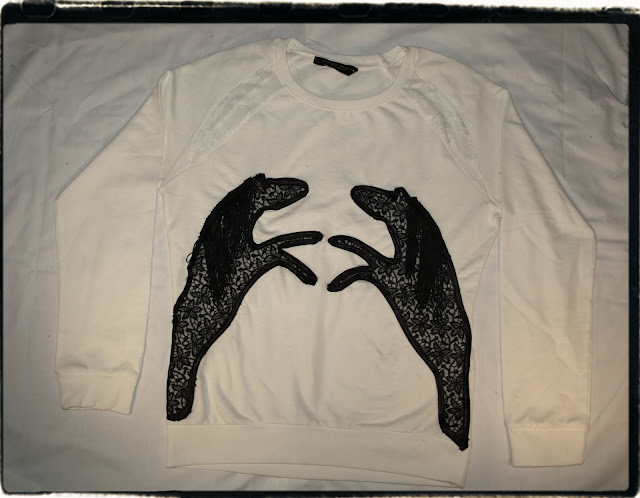 Top-stitch satin binding along the edge and attach two 'manes' of fringing.
Posted by ChicCheatCharley at 15:15 No comments:

The Trends on Wednesday: In the right garden 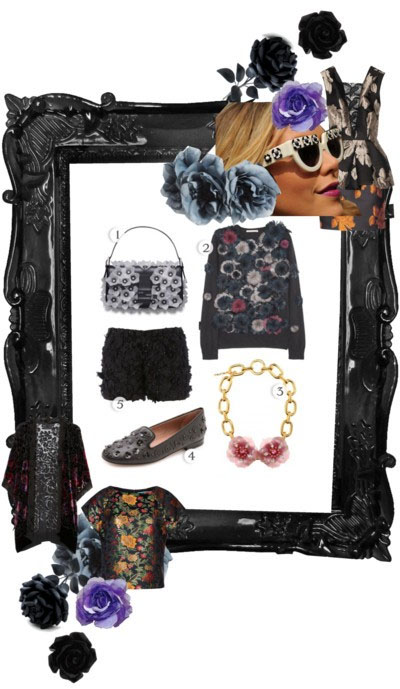 in the right garden by chiccheat featuring coral jewelry


With the transition from summer to autumn officially complete - meteorologically as well as commercially - fashion florals are minding their manners with reflective, demure sophistication. Expect the vibrant, eclectic floral melee that dominated the high street in the summer to be reborn in a dark, winter garden-inspired light this season. Floral fashion has seen many incarnations, from the intricate whimsy of Ossie Clark to the graphic geometry of Orla Kiely, and so many in between. It made an inevitable foray into the high street in the form of embellished and appliqued daisies, inspired by 1920s fashion and The Great Gatsby film remake. This season, depth is key, with a palette of sombre grey tones and rich burgundy hues, offset by layering and three-dimensional motifs. There's a conceptual angle here: Christopher Kane said in an interview at London Fashion Week  that a recent inspiration was a trip to his old high school, where he drew dissected flowers; it made such an impression because it incited him to appreciate how they're "taken for granted" and about how similar they are in structure to the female sex organs. The analogy likened the hidden depths of flowers to the subtle, complex idiosyncrasies of female sexuality - another concept so often glazed over superficially. His creative voice always was to portray sex as an undertone rather than a blatant message.


This winter garden aesthetic could be as significant a point in the evolution of florals as any, with the resonance of fragility, elegance and intrigue. Certainly, it can't hurt to bolster fashion's case for intellectual relevance. To quote Christopher Kane "I mean, I'm not going to just do roses-blah-blah-blah, am I?"

Posted by ChicCheatCharley at 15:23 No comments:

The Trends on Thursday: Only Fashionistas Need Applique? 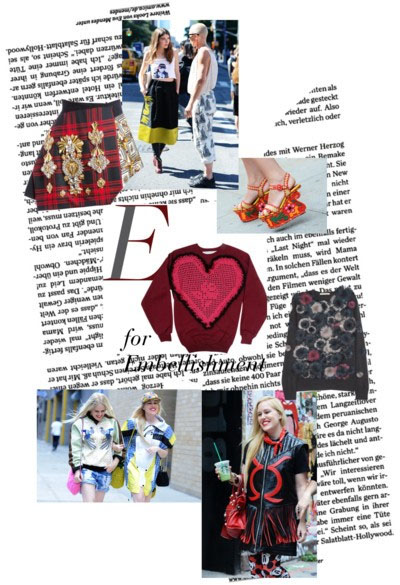 Live it collage by chiccheat on Polyvore


Back I am, at the later-than-normal time of Thursday to check in with you briefly, amid the colourful chaos of New York Fashion Week. Not in person, you understand; that's so very last-generation! This is the age of live streaming and social media immediacy, where the best seat in the show is your desk chair, thanks to style.com et al. Topshop have even taken it upon themselves to take their interactive coverage to the next level, with access to the “red carpet,” behind the scenes interviews with models and designers, multiple camera angles and even a collage tool. We are living in a "YouStyle" age where we the buying, blogging public have as much authority to dictate the medium as any paid professional  involved. Who needs glossy magazine photoshoots when you've got personal style bloggers inspiring more followers and interpreting brands with infinitely better direction and panache? It appears we're also no worse placed to predict trends than Premiere Vision either!


With that, I'm led to the ever more current facet of fashion: the art of self expression. How I laugh when I consider that one's clothes are supposed to reflect one's character, as a set of predictably legible signs, concocted to create an interchangeable, semi-individual code. Apply that logic to my bursting-at-the-seams wardrobe and you have a very confused, unpredictable being, with more personalities than you can shake a 4" heel at - on top of a worryingly excessive shopping habit! Certainly, notions of sartorial signage are popular among the intellectuals, and, if we look at more extreme contexts, prisons, for instance, strip their inmates of any potential outside identity for suppressive reasons. That still doesn't prove that the notion should be taken so literally or applied so broadly.


An up-and-coming resort trend is intricately worked handicraft, from crocheting and embellishment to appliqué. In fact, it's already making waves among must-have items for this winter - and holding strong among the stars of street style at New York Fashion Week. Referring back to the logic of self-expression, a quixotic cocktail of colour, clash and creative craftwork denotes some very unpredictable characters, indeed - then again, these are fashion types we're talking about!

Posted by ChicCheatCharley at 15:37 No comments:

Floral and Arty - How to DIY Valentino Floral Combat Boots

This year's famous floral trend has a winter garden aesthetic to boot! 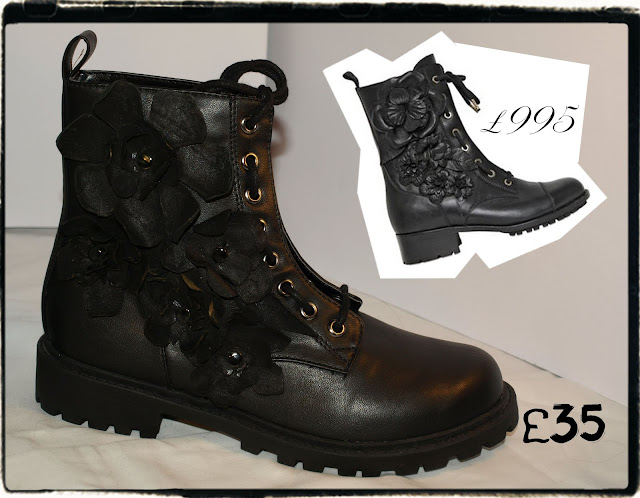 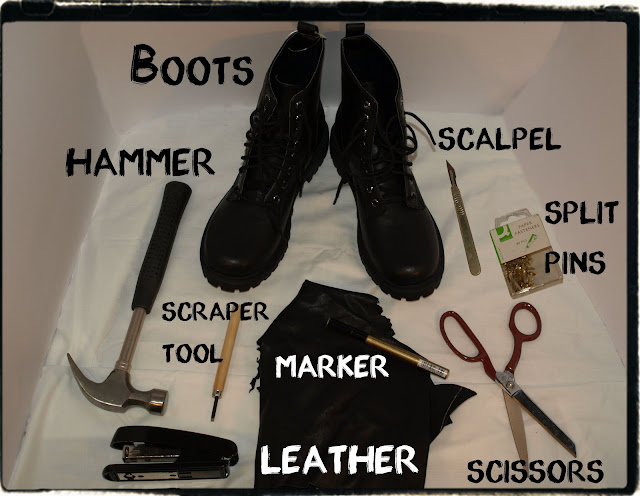 NB: For a scraper tool, I used a narrow wood carving knife but it doesn't have to be that specialised - a blunt scalpel will do.

It was fiddly in places but, while there was more to the process than first expected, I don't remember struggling with any of it. However, it does help to have a pretty steady hand!

I used half a skin of leather I already had lying around so that would have been £10. The boots were £24.99 from H&M. I was actually lazy with sourcing - you can get combat boots for as little as £10 on eBay, or be even luckier with charity shops. Incidentally, I'd also recommend charity shops as a good place to get real leather; you can get good deals on bags and clothes, which you can then dissect. Either way, I digress - basically, I spent one respectable heck of a lot less than £995, which the original would set you back! 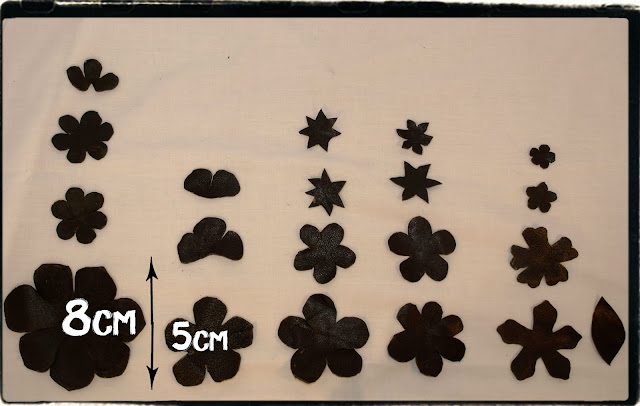 Cut out four of each of the following pieces in a similar size - the most relevant ones being 4 flowers measuring 8cm in diameter and 16 flowers which are 5cm wide. These are our bases, while the ones near the top will give different 3D textures.

If you're lucky enough to own a working printer, you might want to print out the above image as a template, which I think is about A3 size - apologies for my laughably poor maths if it isn't (God only knows how I got that A* at GCSE!). 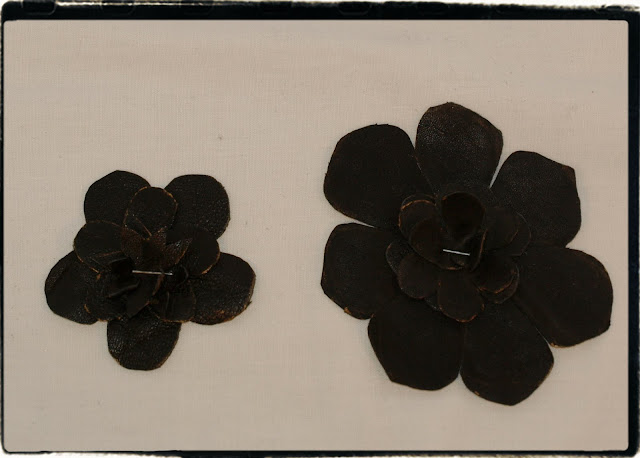 Once you've cut all your pieces out, match the corresponding layers from the template and staple them together to make flowers. Then, get slightly overexcited when you see what your new masterpiece is starting to grow into with the 3D leather flowers perfected. 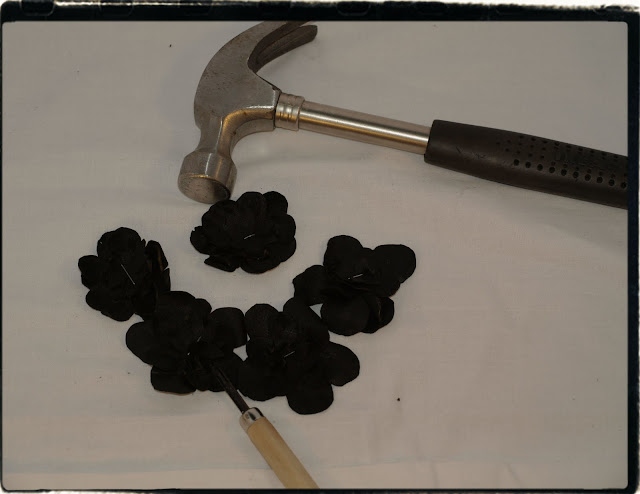 If you want to distress your flowers like those on the original, experiment by boiling them in water (yes, really) and tapping them with your hammer to smooth and soften the edges - not too hard, though. or you'll rip through them. You can also use your scraping tool to get some subtle textured finishes. If either of these parts scare you, you'll be pleased to know they're optional. You can also do as much or as little as you want so if you'd only like to do a few flowers, that's up to you. 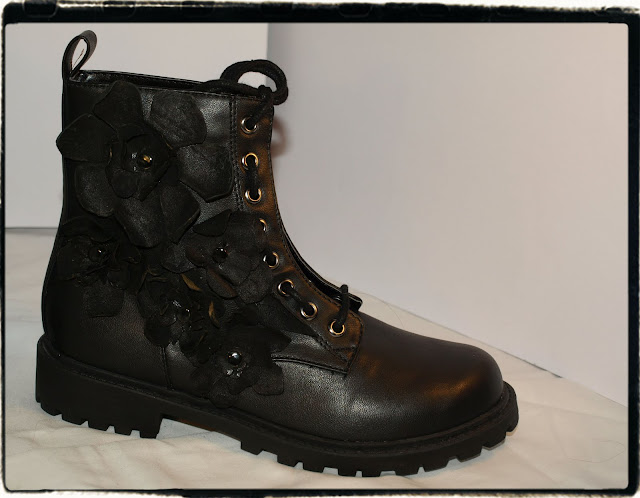 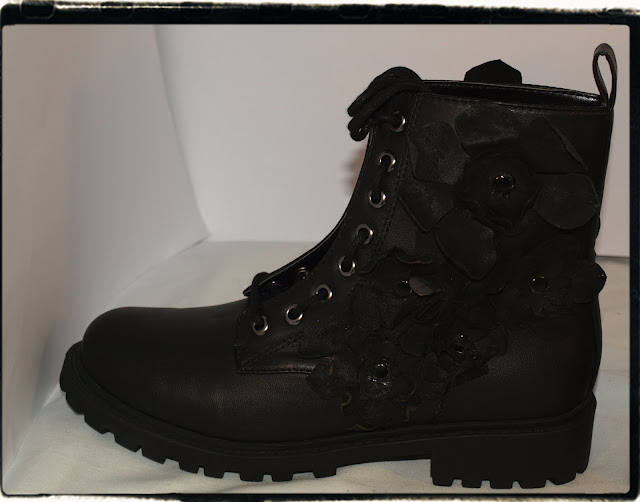 Use your scalpel to pierce holes in your flowers and boots and secure them in place with split pins. You might also want to use the scalpel to prise out the remaining staples. Don't use staples to attach your flowers - I did, initially, and it didn't work! You may notice that I tinted the split pins black with some nail polish in the middle,for the sake of consistency. 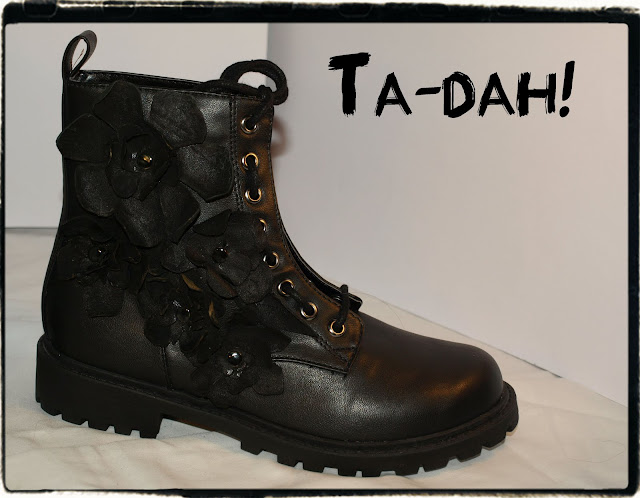 Posted by ChicCheatCharley at 15:15 No comments:

The Trends on Wednesday - Of Colour and Contrast 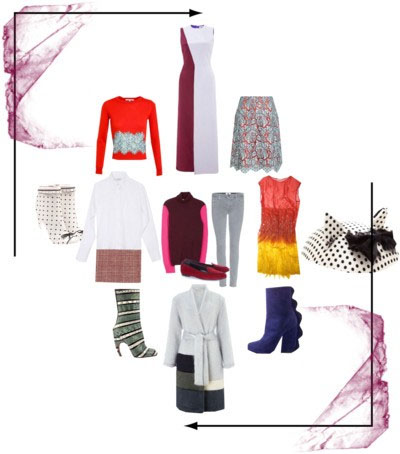 Of Colour and Contrast by chiccheat on Polyvore

A lower key trend than usual but a key seasonal statement, nonetheless, which can be applied to clothes and styling - quirky colour combinations. Roksanda Ilincic, Alexis Barrell and Carven are among the designers inspiring us to face the winter gloom with brilliant tonal contrast, in shades of burgundy, blue and coral.

Posted by ChicCheatCharley at 14:00 No comments:

Cream of the Crop Tops - A strappy DIY

A strapping, young DIY inspired by the season's cut out crop top craze. 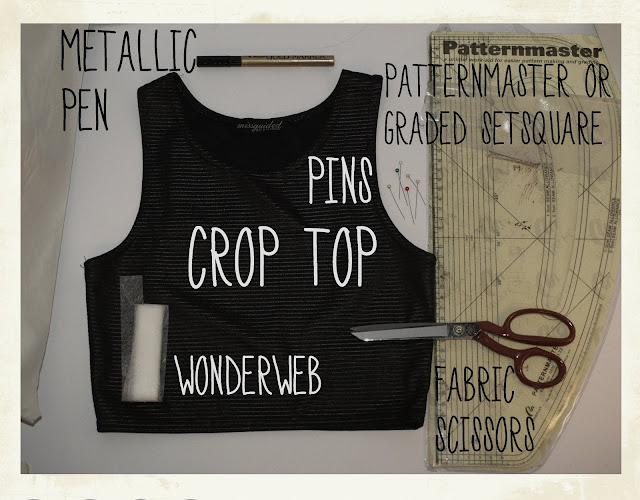 To say this DIY is a total breeze might be tempting fate but I didn't find it especially hard.

Mine came to about £6 because I struck it lucky with the top! 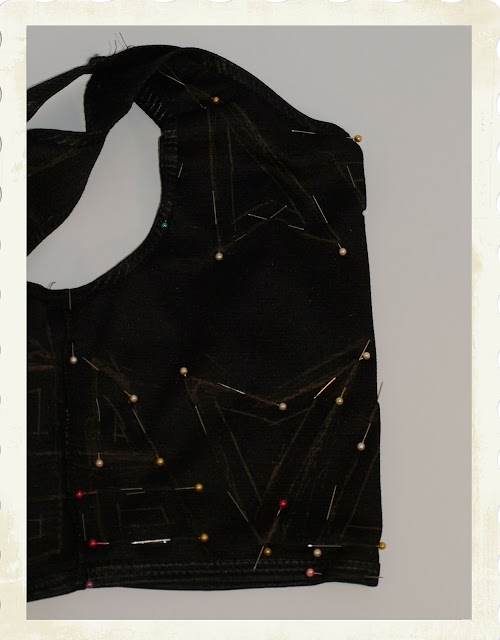 Turn your crop top inside-out. Fold it in half, across the front and pin all the seams and edges together, as much and as accurately as possible. Sketch out your design using something contrasting and opaque which doesn't rub off easily - I find metallic pens do the trick. Pin all the corners of your designs together - as shown in the picture - and use them as coordinates for tracing a perfectly symmetrical design on the opposite side. Repeat this process with the back. 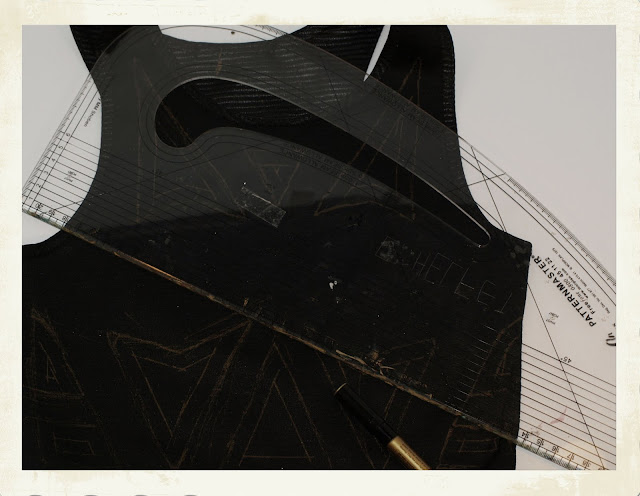 Use your patternmaster, or graded setsquare, to trace out an outline 1cm outside each line, much like you would with a seam allowance - only here, there are no seams involved, or hemming, for that matter! 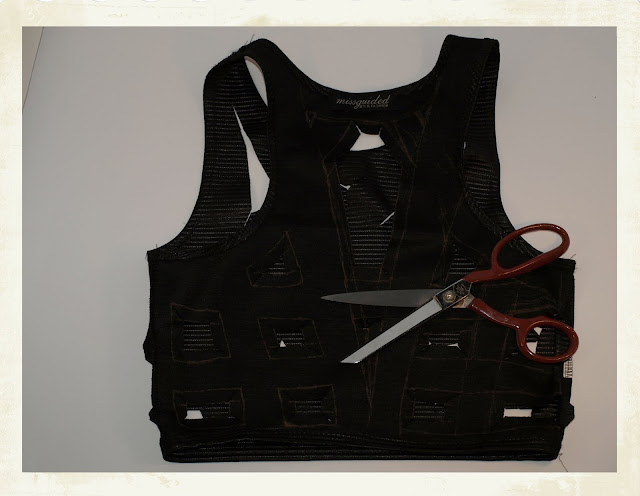 Cut out all your outlines and cut diagonally into the corners. I don't especially want to give the ending away but, basically, this makes folding easier. 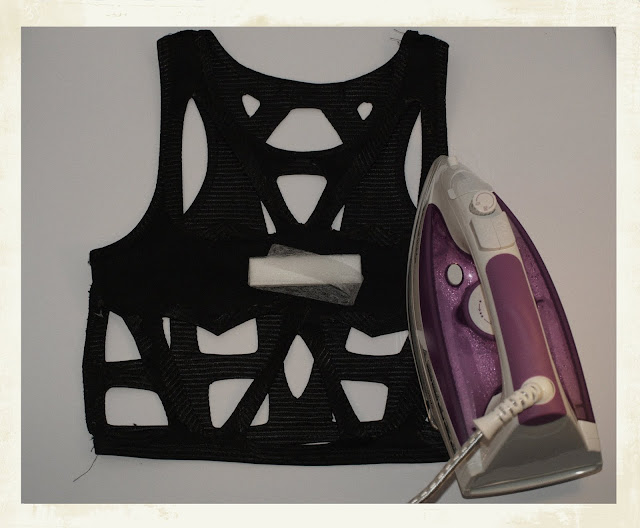 Fold back all your edges, along the original outlines of your design, and iron them in place with Wonderweb. You can secure them even better by sewing inside the edges but this is optional. 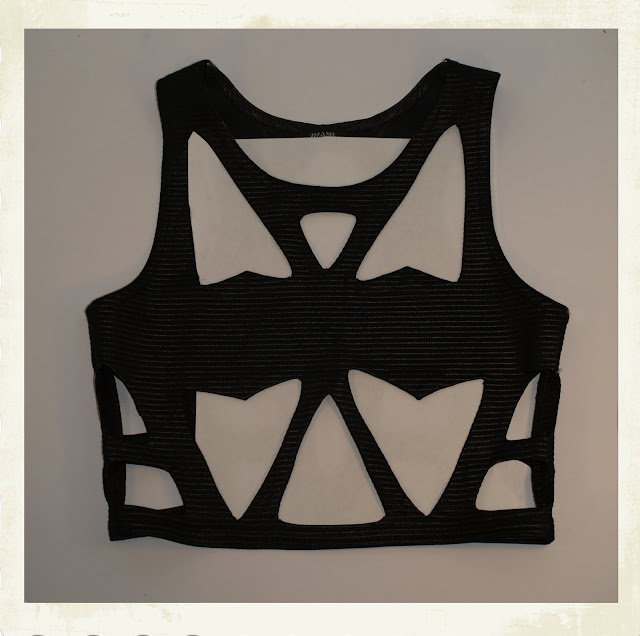 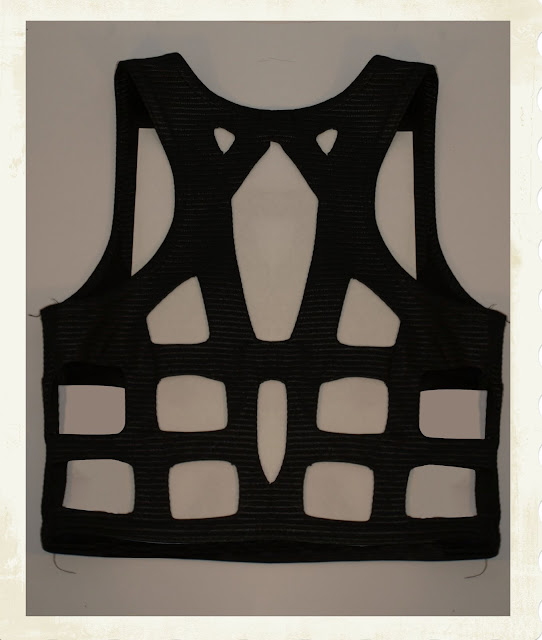 Posted by ChicCheatCharley at 15:34 No comments: