The Trends on Thursday - Under the illusion

Can fashion add another dimension to florals? 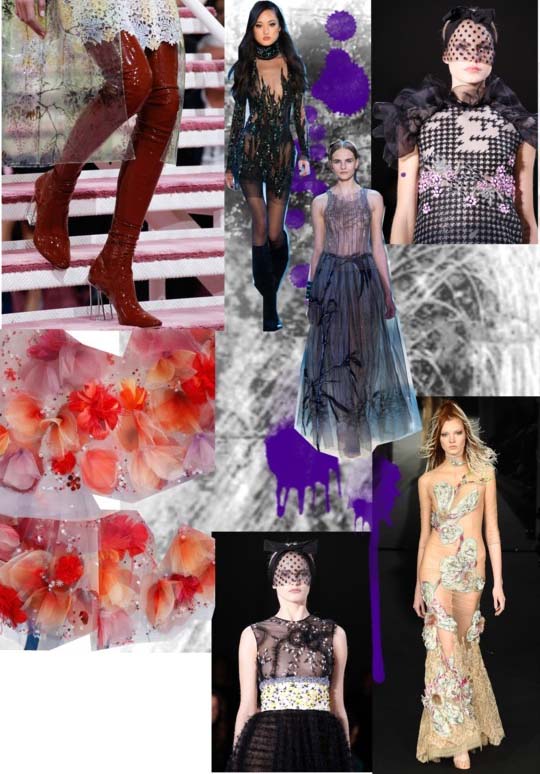 Under illusion 1 by chiccheat on Polyvore

I decided that, rather than churning out what every corner of the fashion press has already heralded with respect to the pre-fall profferings, I'd observe the trends, in the broader sense of the word from the Parisian couture shows. An indulgent tradition that consolidates fashion's aspirational qualities into a heritage-rich legacy, I'm aware that couture isn't what you'd automatically associate with on-trend features for distilling to high-street level. However, I did notice a recurring theme: a recurring floral theme. Sure, florals, in themselves, are nothing new as a fashion trend; the past handful of years have seen them interpreted in acid brights and oversized motifs. Charles Edward Jerningham wrote, in The Maxims of Marmaduke: "The flowers of fashion have but fickle friends; they are the freak of the moment, much prized today, the more despised tomorrow." Permutations on types of flower and colour schemes have been explored extensively, to the point now that trends and seasons, if anything, are distinguished by the way florals are incarnated. The demure hues of the Spring 2014 florals, for example, could have plausibly heralded the wave of feminism that would take centre stage that year; rather than occupying negative spaces, the graphic nature of the palette could be interpreted as a call to recognise the fragile beauty of femininity.

And so, the scene is set for the Paris couture shows' take on flowers. Appropriately, for an area where much media fanfare is given to the overwhelming volume of craftsmanship involved, flowers took on a three-dimensional form - not in any way resembling the Paco Rabanne-esque metallised interpretation by Miu Miu, back in 2010 but with tireless layering, opulent embellishment and texture-rich appliqué, causing flowers to burst out of the fabric or fade fluidly into swathes of chiffon. Alexis Mabille layered peonies and pansies, in embroidery and three-dimensional  appliqué, onto lace and sheer fabric; Chanel's flowers, made from opulent clusters of embellishment, emerged from geometric three-dimensional patterns and were veiled by diaphanous material; at Dior, printed PVC rain jackets and chiffon were draped over chunky floral lace and tattoo prints and at Giambattista Valli, flowers were formed from mixed appliqué on chiffon and clusters on lace.

I think I need to accept that this aesthetic assault on the senses might be a bit much to inspire any sort of viable DIY project. However, I feel I need to 'park' it as a thought within the wider context of inspiration. Between the graphic prints, three-dimensional embellishment and illusions through layering of fabrics, I've seen a few things I'd like to think I'll see more of, even if it falls to me to make it happen. 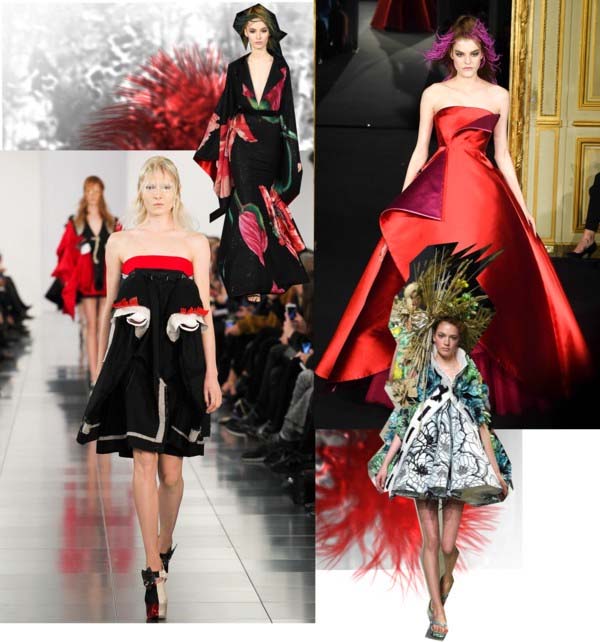 illusions 2 by chiccheat on Polyvore

Posted by ChicCheatCharley at 15:14 No comments:

I'll publish the tutorial in full soon but just to keep you up to date on the things I've got up to - in a way that doesn't involve vapid numeric brags about my recent gym performance - I thought I'd share some pictures of my Laurence Dacade-inspired suedette boots with floral embroidery; rather than subject myself to hours of painstaking labour, I attached some embroidered fabric, using fusible fabric glue and hand-stitching along the edges. 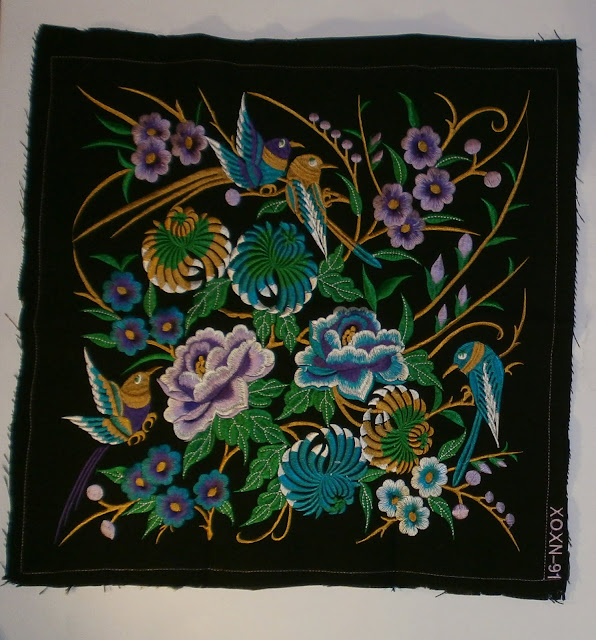 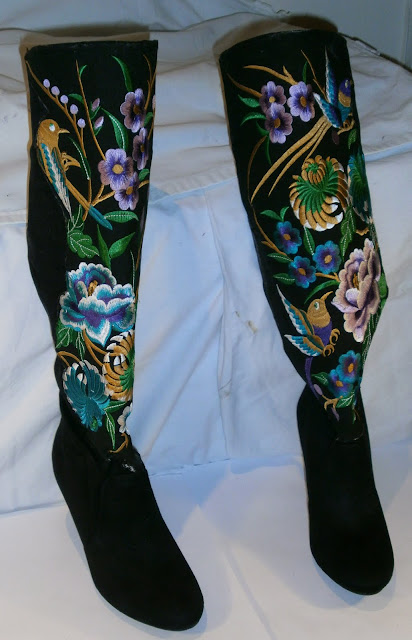 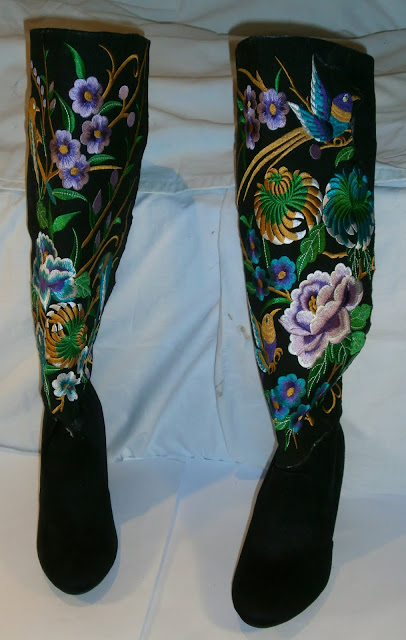 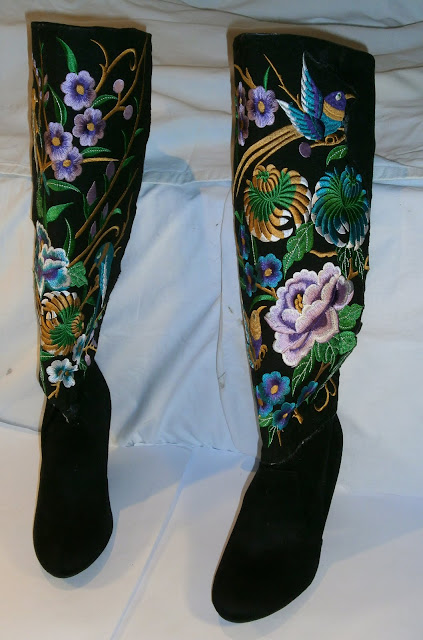 Posted by ChicCheatCharley at 15:59 2 comments:

Smocking Hot - How to do smocking by hand

Owing to this week's schedule and external pressures, I've decided to take it easy and go off the beaten track as far as on-trend pastiche-come-plagiarism is concerned. In amongst the hustle and bustle of the weekend, and the rigours that came with it, I decided to turn my hand to smocking. 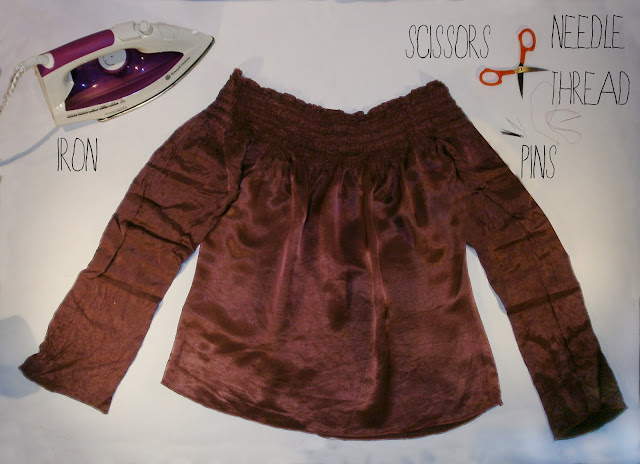 NB: The top or garment needs to made from synthetic fabric or it can't be moulded; natural fabrics, such as cotton, have too high a melting point and don't behave in a heat-malleable way.

Pins need to be as narrow as possible; ideally, you should avoid pins with round or wide heads.

I fear I might be jumping the gun in assuming that it's a complete doddle, since there is a smattering of technique involved. It helps to be good with your hands and especially dexterous with your fingers. Confused? All will be revealed.

This wasn't as quick as I expected - I'm not entirely sure if that was down to perfectionism or being distracted by the television, which I like to have on in the background - but if you do the design I did it shouldn't take more than a couple of hours. 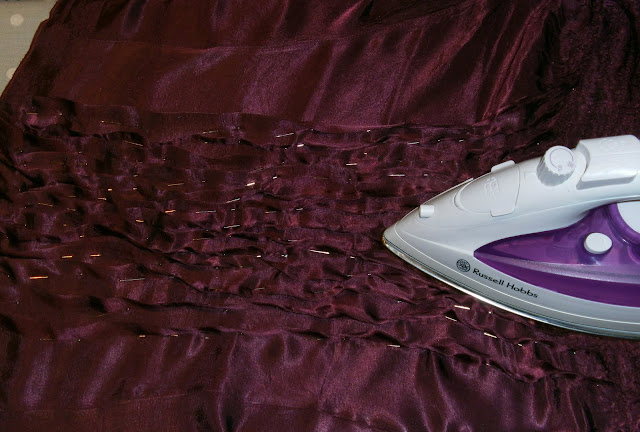 Concertina-fold the fabric , lengthways, along the middle of the top, or wherever else you want your smocking to be. Pin it in place and iron the  pleats  on as high a setting as possible - your aim is to get the plastic to change shape through heat without melting it. I would recommend working up to the highest temperature you can and practising on some scrap fabric, if possible. You can also heat-set some synthetic fabrics by boiling them in water for a short while - sorry I couldn't be more helpful with timings but it's been a while since I last attempted that particular method! 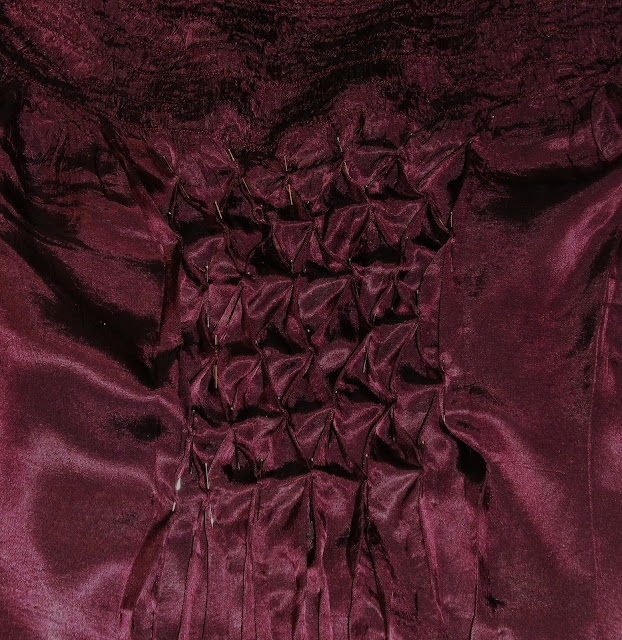 After you have fixed the pleats, unpin them and pin the tips of the pleats together at alternating intervals to make diamond patterns. Hand-stitch or glue the tips together and unpin them. Since I was doing my design lengthways, I didn't do diamond shapes completely along the pleats, ; I stopped about a third of the way down, and would recommend you do the same, so that it fits more easily. 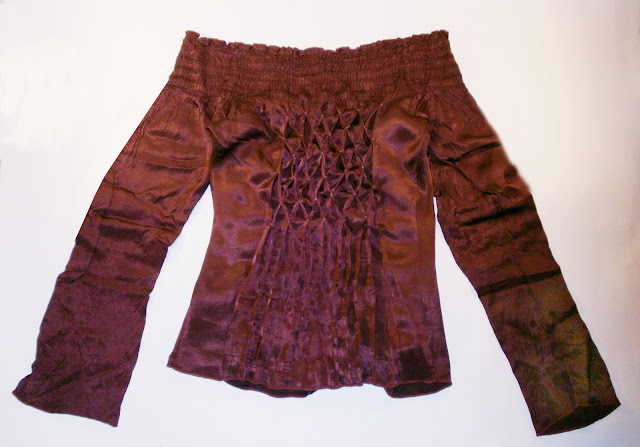 The Trends on Thursday - Make clothes not war 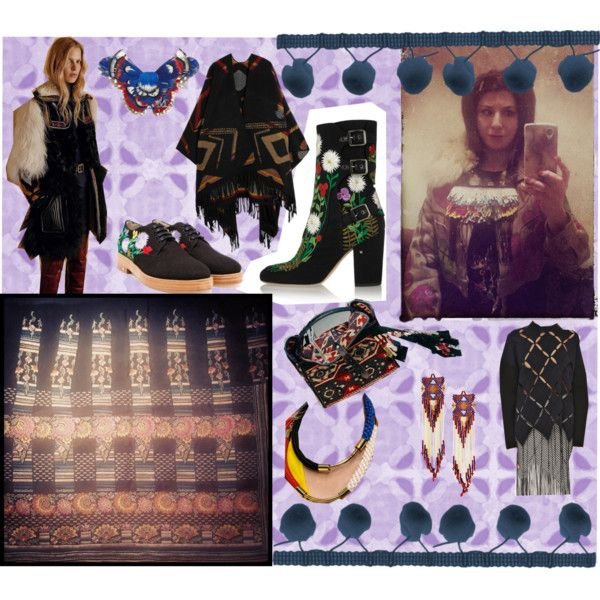 It's been pretty well established that the '70s are fashion's decade-du-jour for references, with a distinctive colour palette, silhouette and bold, oversized prints - especially florals.   Geometric patterns and other paradigms, such as paisley, have been honoured in a straight-to-pastiche fashion, while others have a greater conceptual depth, for example, the bohemian peasant-chic trend. From tie-dyeing at Pucci to the embroidered shoes at Laurence Dacade and all the ravishing unravelling-look fringing in between, the homages to handicrafts capture the very essence of the era Tom Wolfe dubbed the 'me decade' - a zeitgeist centred around self-discovery and awareness; you certainly don't get a much better example of self-expression than craft! So, I thought I'd inspire you with some on-trend ideas, for your crafting pleasure and of course individual interpretation.


Never underestimate vintage and charity shops, or even other people's unwanted clutter for some great finds. While I don't, in the interests of your sanity, recommend that you sit and embroider a square metre of fabric for hours(/days/weeks/months), you never know what you might find that could add that crafty personal touch. I found this beauty whilst rummaging through my old wardrobe at my parents' house - so it could well have been a genuine '70s work. It was far less stressful than ploughing through the bedlam of January sales, more fruitful and, with a price tag of precisely £0, cheaper.
Posted by ChicCheatCharley at 15:43 No comments:

Haute Fluff - How to DIY a Shrimps faux fur jacket

Faux fur is more than just a bit of fluff this season.


Although an early 2014 street style staple, Shrimps' statement stripy fur jackets are still riding high with the faux fur trend. The label's distinctive stripes are a sure-fire statement piece for brightening up any outfit in the winter gloom - and every bit as easy to DIY. 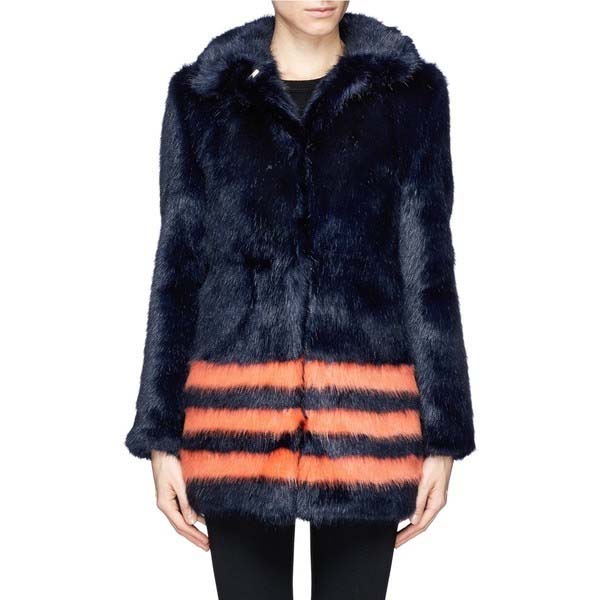 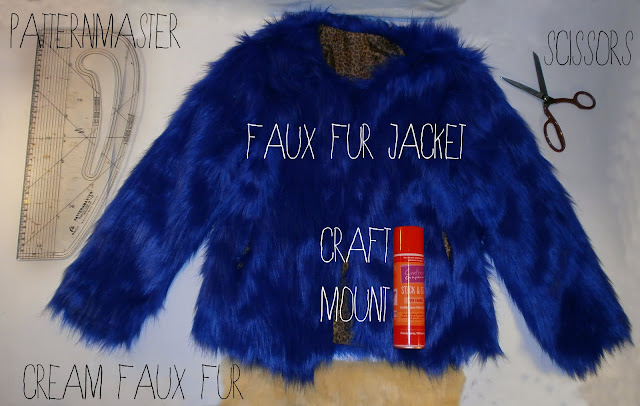 Sourcing tip: Shop around on eBay for the best deals on faux fur coats and comb your local flea market for the fur.

NB: You can also use fabric glue if you're not keen to get messy.

Measuring and  cutting in straight lines is the biggest challenge you're likely to come across here and while they're not quite as easy to get perfect as they look, they don't require any skill, just a steady hand.

A few hours, at most. 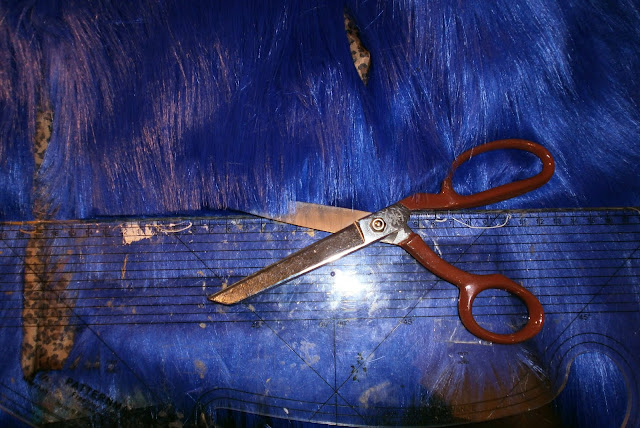 Use your patternmaster to measure a parallel line 4cm from the edge of your jacket and cut the fur along the line with your scissors. Measure and cut a line 2cm above the previous one and trim down the fur between the two lines as far as you can. Repeat the process by making a line 2cm wide and 3cm above the last one.

Cut two flat lines with the same spacing and width starting 4cm from the cuffs. The flat lines should look something like these: 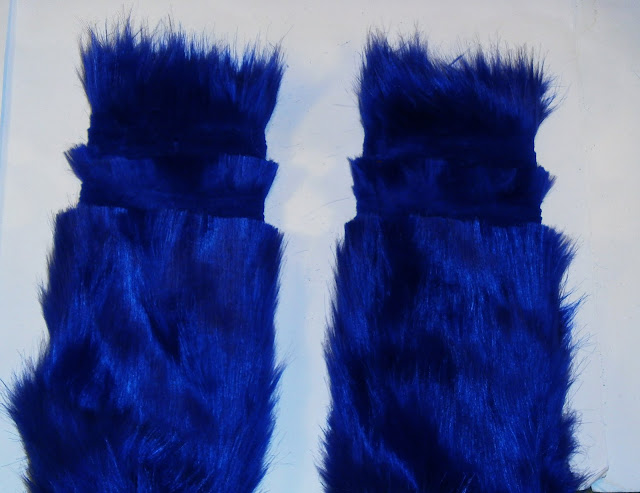 Measure the circumference of your cuffs and the hem of your jacket. Cut four pieces for the cuffs and two for the hem; each piece should be long enough to cover the relevant circumference and 2cm wide. 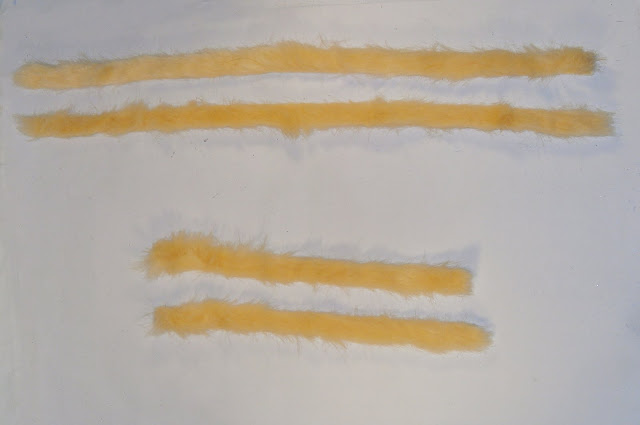 Measure the circumference of your cuffs and the hem of your jacket. Cut four pieces for the cuffs and two for the hem; each piece should be long enough to cover the relevant circumference and 2cm wide.

Glue the faux fur pieces inside the flat, trimmed areas. 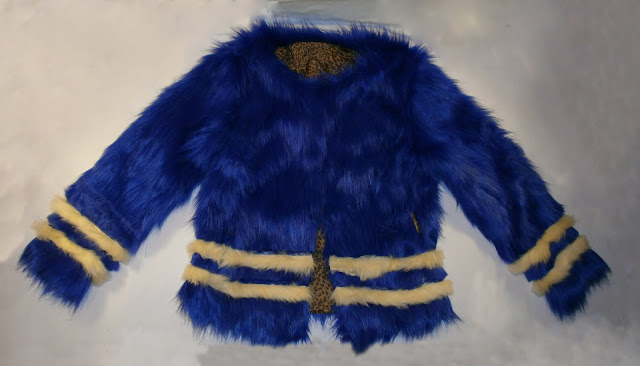 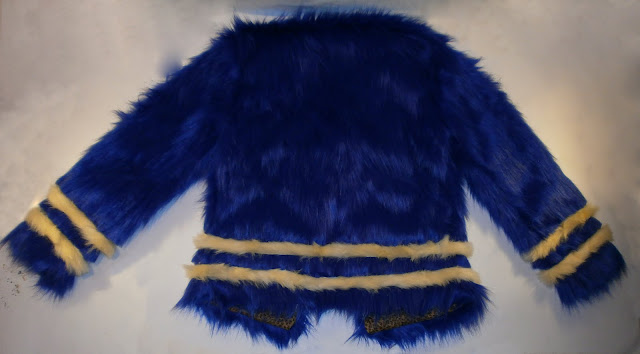 Posted by ChicCheatCharley at 15:38 No comments:

Now that Christmas is nearly two weeks in the past (perchance a lifetime, in real terms, as far as evangelists of the new year detox regime would have us think) I thought I'd share my experience visually in flashback form. Technically, anything in the past qualifies for casual celebratory flashback material, doesn't it, even if it's not quite the timeframe that, say, James Laver might deem noteworthy? For this entry, I will take an affirmative view of that statement to recall the tranquil, indulgent idyll of the two weeks spent at my parents' house in Kenilworth - a place I like to call the vintage pearl of the English Midlands, with its opulently historical architecture and centuries-old landmarks - surely that's a throwback of sorts?

Posted by ChicCheatCharley at 15:14 No comments: 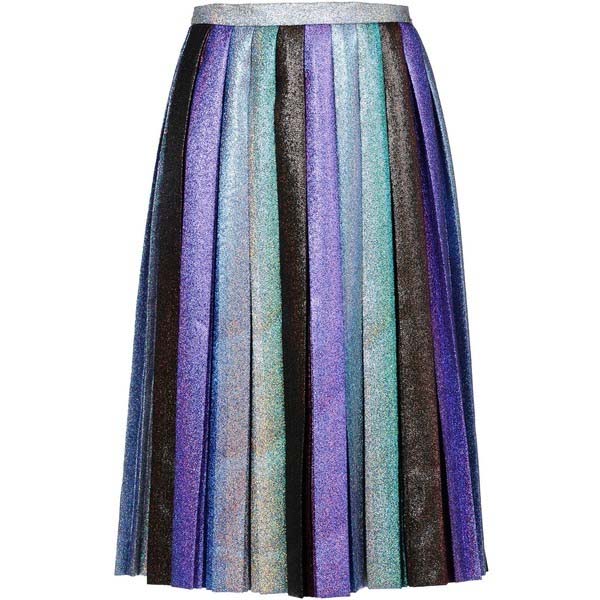 If this project seems a little late to the party, it's because I intended it to be a pre-new year's eve entry as a last-minute DIY fashion idea. Sadly I was away from home - and therefore some 99.9% of my DIY paraphernalia - and then, to cap it all, who knew that two weeks' free board and lodging courtesy of parents came with conditions of cleanliness attached (and that fine glitter particles are one among many noxious substances that get trodden into carpeting, causing irreversible ruination, if they're not dealt with within seconds of spillage)? Nonetheless, now that I'm back in the Zen calm of home, away from distractions, I figured it would be my last chance to take on the glittering, graduating trend of holographics 2014-style (late 2014, obviously; should it really look that bad to drop a time from four days in the past?) so I took on the Taylor Swift-endorsed Marco de Vincenzo metallic pleated skirt. 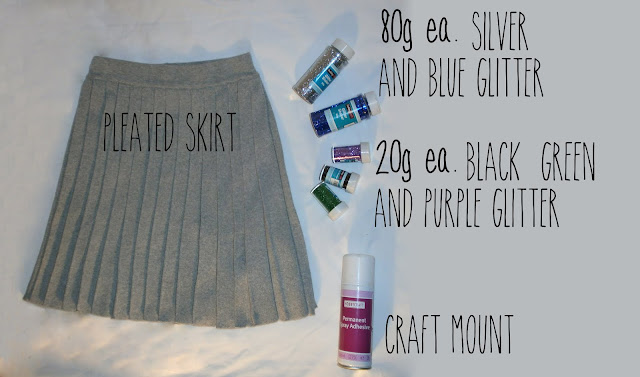 NB: Use fine glitter for an authentic lamé effect.


You might need more than one can of craft mount to cover the whole skirt. I'd recommend using Crafter's Companion Stick and Stay Mounting Adhesive.


I would also recommend using a fixative after applying the glitter to avoid 'molting.'

As a quick disclaimer, I'm referring specifically to the method. It's as quick, easy and satisfying to make as they come. However, keeping the area clean is significantly more of a challenge and tailor-made for those who like vacuuming.

About an hour per side.

Get your glitter on 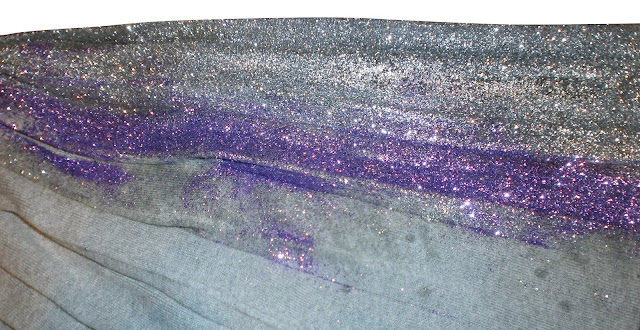 Spread the pleats out as flat as you can; I would recommend doing them one by one. Cover each pleat in craft mount and sprinkle some glitter on top of it. In order to stop it from gushing out, hold the glitter shaker on its side and tap it with your fingers:

After you've covered all the pleats, sprinkle some silver glitter onto the waistband. 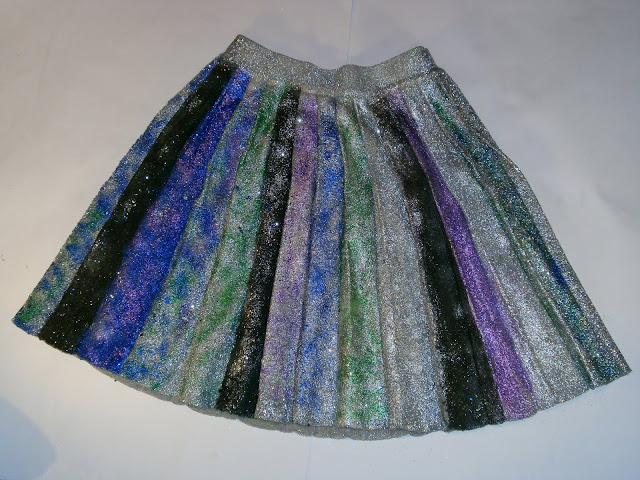 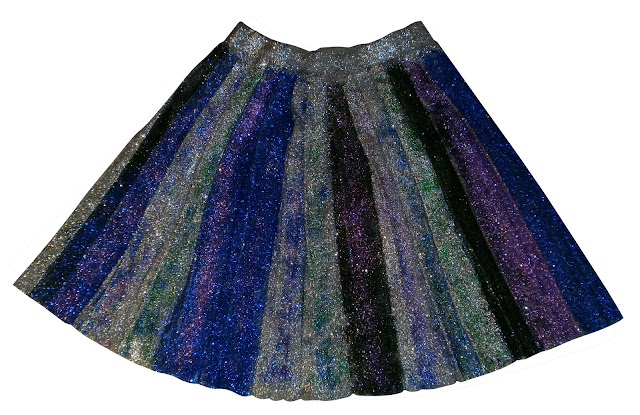 Posted by ChicCheatCharley at 15:31 No comments: