...Or rather retold in the form of hitherto unpublished work. My ode to Emilio Pucci's Autumn 2011 asymmetric crushed velvet dress was done a while ago and would have been put together as a living, breathing on-season blog entry had my printer not decided to do what printers do best and let me down completely. Logistical issues aside, I'm still proud of my version and still proud to present it to you in a slightly experimental blog format that is an homage to collage queen p.s. I made this (an homage, you understand, not plagiarism - I save that trick for overpriced fashion clothing - yes, that's my story and I'm sticking to it!) I considered communicating my methodology through the medium of expressive dance but that would have meant wrangling tirelessly with video editing software, and I'm afraid in this instance I couldn't be asked!

So here's my collaged and illustrated oeuvre, demonstrating that:

1m bondaweb (or freezer paper as I believe it's also known)

An iron and ironing board

A printer with at least 6 pages of paper

... plus a touch of crafty ingenuity are all you need to get this look:

Posted by ChicCheatCharley at 16:38 No comments:

... Or what £11 in thrift shop buys and the celebrities' choice of broderie-trimmed brilliance have in common.

But first, a bit of colourful language:

"This stuff? Okay, you think this has nothing to do with you? You...select that lumpy blue sweater...because you're trying to tell the world you take yourself too seriously to care what you put on your back, but...that sweater is not just blue. It's not turquoise, it's not lapis, it's actually ceruleo. You're also blithely unaware of the fact that in 2002 Oscar de le Renta did a collection of cerulean gowns, then it was Yves Saint Laurent who showed cerulean military jackets... and then cerulean showed up in the collections of eight different designers, then filtered through department stores and trickled down into some tragic Casual Corner where you, no doubt, fished it out of some clearance bin. However, that blue represents millions of dollars and countless jobs... It's sort of comical how you think you've made a choice that exempts you from the fashion industry when, in fact, you are wearing a sweater that was selected for you by the people in this room."

Those were the fictional words of Wintour-lite editrix, Miranda Priestly, at the helm of the also fictional Runway magazine, and the infamous protagonist of the 2006 film, The Devil Wears Prada. Wasn't it big of her? Whoever said the fashion industry was elitist? It may be a widely-held - if antiquated - view that the high street owes all of its inspiration to the top drawer, and understandable as to why such a figure might adopt the most patronising possible stance to fight couture's corner. However, we, from the convenience of our own homes - and, of course, computers - know the trickle-down theory to be less of a universal trend and more a single concentrated facet of the rag trade as a whole. Fashion takes as much of its influence from the ivory tower of the elite as it does from the streets. In 2006, Ron Frasch, the vice chairman and chief merchant of sales at Saks Fifth Avenue cited California - rather than New York - as a fashion inspiration capital, and named Chloé, Stella McCartney and Balenciaga as the most influential designers.

Arguably, I'm shooting myself in the (home-painted D.I.Y.) Louboutins quoting that film at all if, as intended, I am to assert myself as any kind of authority on fashion. 2002? What do you mean it was more than 5 minutes ago? Rewind ten years and Oscar de la Renta, as it happened, was most definitely not  in the blue then opting, instead, for swathes of fur and intricate folk-inspired embellishment in his Russian Cossack hats and coats, respectively. Yves Saint Laurent, meanwhile, was to herald his retirement with a retrospective show courtesy of Tom Ford that would prove a welcome distraction from my art, German and French A-level, as far as I was concerned (Heavens! Did I just admit my age!?) Not a military blue coat in sight. But then, if it is Parisian couture dabbling in military coats with heavenly shades of sky blue we're talking about, then John Galliano was definitely your man, with this oversized oeuvre: 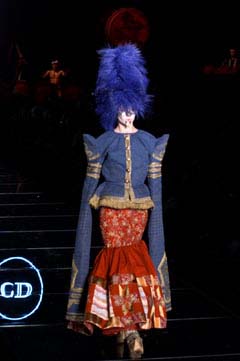 And my on-season point is? A propos of this broderie-chequered playsuit from this year's Spring collection by Louis Vuitton, as seen on many celebrities, including Scarlett Johansson and Alexa Chung: 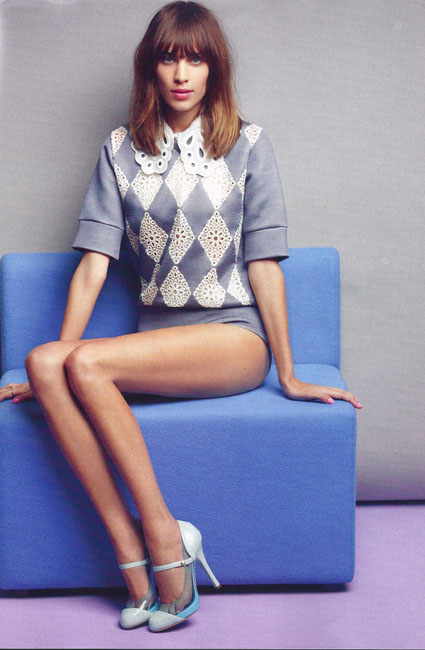 Its shade, like a clear springtime sky, sat comfortably among a host of pastel tones, sheer fabrics and graphic broderie Anglaise. It may have been a shift of paradigm in terms of general colour palettes from the previously mentioned example but the pale colour was definitely back in season. Is the couture conspiracy theorist in me getting unnecessarily excited at both designers concerned happening to be Paris-based? Perhaps, since John Galliano, himself has said "creativity has no nationality"(.... and then something bigoted as well, but we won't go there!) And if we are going on the glib assumption of fashion moving in cycles or permutations of history repeating themselves, I found it fitting (and satisfying) that some seemingly forsaken charity shop clothes could so accurately echo a key colour of the present season. Was it a question of trends and timing or of the bigger picture of fashion being a more complex web of interdependent influences, none of which could possibly be too high up or low down not to matter? Whoever out of these proverbial chickens and eggs  is responsible, you definitely can't argue with getting the look accurately with an £11.15 charity shop price tag. That is all!

A white collared shirt (and I'm not being professionally snobbish - ahem, terrible joke, I do apologise!) £3.25

I also used a second-hand jersey top with broderie detailing, £3.95

Rest assured, I've attempted more challenging projects in my Chic Cheat career but this is a fiddly one and, it turns out, not to be underestimated.

A bit of a foggy estimation, this one but you're looking at about 15-20 hours. 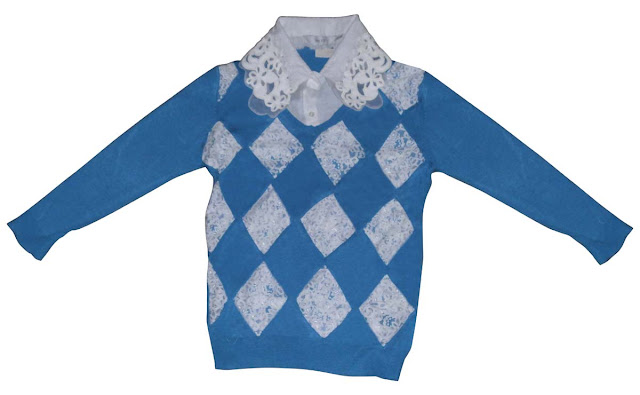 Posted by ChicCheatCharley at 06:56 No comments: 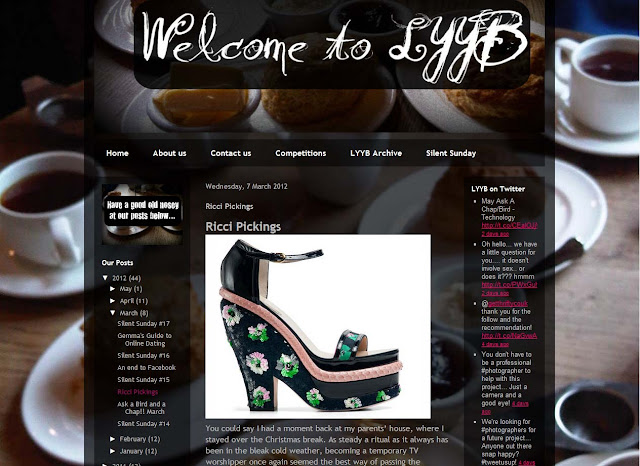 Some inspiring news for you, dear readers and an exciting new milestone for me here at Chic Cheat. This latest entry is being brought to you in the form of a guest blog takeover at independent online magazine LYYB. Click here to find out how to replicate Nina Ricci's spring 2012 blossom wedge sandals  - and enjoy!
Posted by ChicCheatCharley at 14:19 No comments: