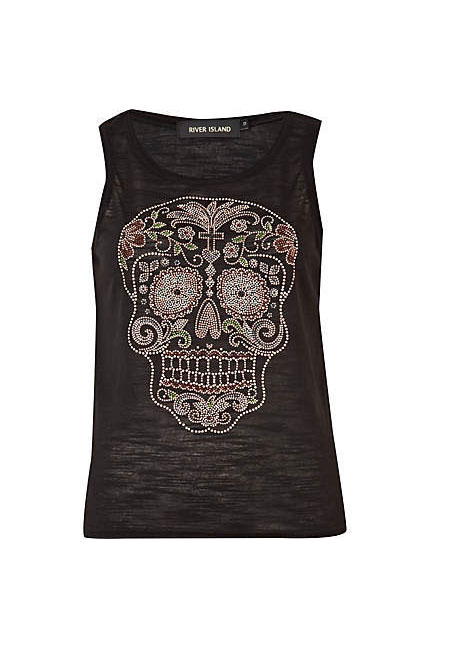 Following Sunday's technical tour-de-force, I thought I'd share one of my easier outings. It's my first of the current season and while it wasn't part of the plan to start so late, I thought I'd tickle your creative tastebuds with a titbit of simple-yet-effective problem solving. I simulated the metallic rhinestone effect with bronze metallic paint and added a few colours into the mix, plus a few studs I happened top have lying around. It wasn't the first time I've seen it done but if you're relatively new to crafting or, perhaps haven't the confidence to take on some of my more ambitious projects, I'd definitely recommend it - from experience.

So, from my experience to yours...

A black t-shirt (mine cost £7) N.B. Choose one with a fairly thin, ideally translucent fabric

Bronze fabric paint - the type that comes in squeezy bottles. I find that fabric paint from pots is too runny

Green, silver and brown fabric paint - optional (ideally in potted form, like these)

The following print-out, A4 size: 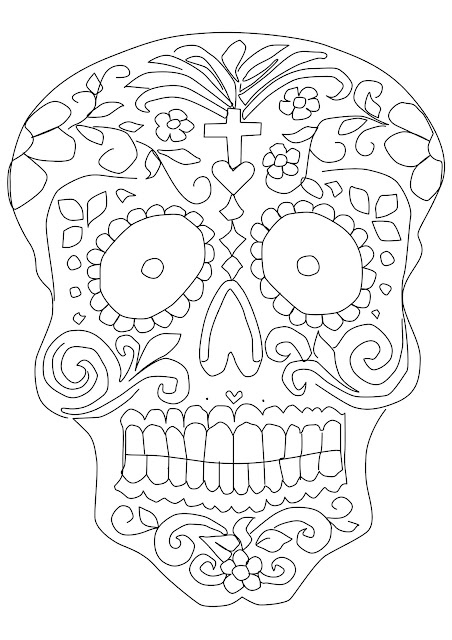 ...and a clear plastic surface to cover it, like a binder sleeve

In a good light, simply place your skull printout in a clear sleeve and under your top, then trace it out with dots of bronze paint along the edge.

You can get some quite nice effects, including long spiky studs...

... and rounded rhinestones, especially if the paint you choose has a nice metallic sheen... 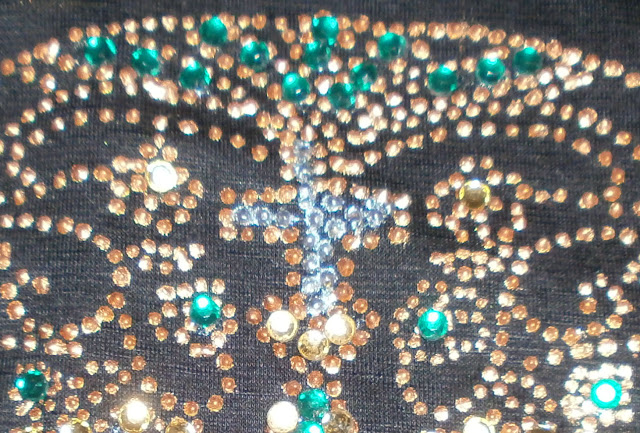 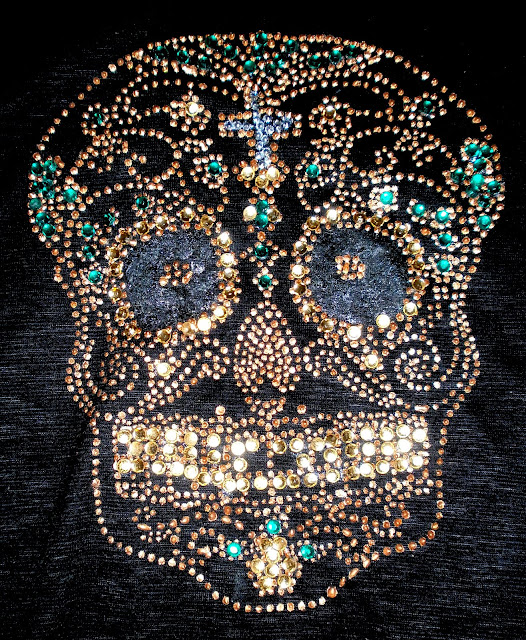 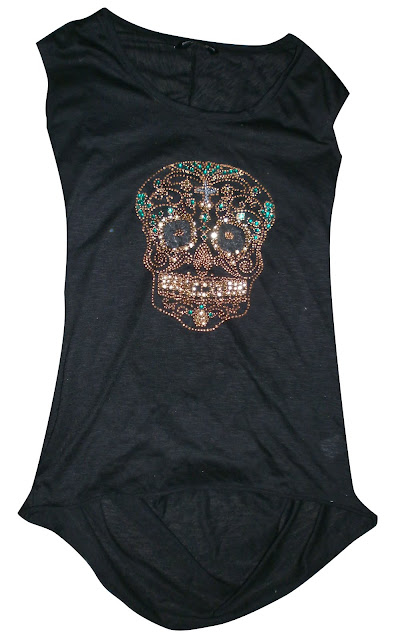 Posted by ChicCheatCharley at 12:41 No comments:

Katy Perry and Lana del Rey give it some lip from Alberto Guardini... 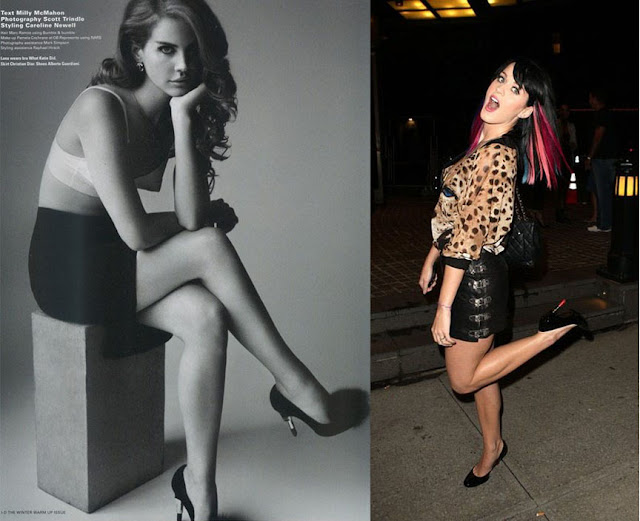 Behold, for I have returned! Apologies, readers - or whoever is left of you - my two, nay, three week blogging hiatus was definitely not part of the plan but an unfortunate array of logistics conspired. I spent this past working week snowed under at the office and the previous 10 days in La Belle France on holiday with the family (sadly sans internets). The handful of work-free days before that? I'd best describe them with an allusion to Greece. No, it's not to do with peplum ruffles being in full swing this season. It's not the hummus, nor their ability to sink the European economy, I mean, God! That's, like, so 2011! They're doing it in Spain now, with many a wicked whisper of them requiring a €150bn bailout to balance the books - well you're no one if they don't love you or hate you in Europe, honey! Nope, the Greek mythological figure in question here is Tantalus, a man whose sinful transgressions secured him an eternity of hunger and thirst, in a pool of perpetually ebbing water, under a permanently out-of-reach fruit tree branch. It's from that very tale that we get the word "tantalising," which is how I'd describe the 4 days in question. 4 work-free days, completely to myself, near the well-stocked fabric boutiques of Kenilworth, turned out not to be to myself at all, but lost to packing, travelling and losing an entire day to an unprecedented last-minute commitment and a sorry excuse for a rail network! Painfully frustrating though it was, I still believe that under no circumstances should art be rushed, yes, including an insanely competitive, machine-gun-speed blogging industry. Thus, I give you, a new entry!

I took on the lipstick heeled shoes worn by Katy Perry and Lana del Rey for this entry. I fancied the reconstructive challenge they presented and found them so deliciously resonant of the pseudo-iconographic visuals of both artists.

Also, you know how you always get that one nauseatingly photogenic friend who will, guaranteed, still look the very apex of beauty after being chased by wild boars through a tropical storm? For whom festivals, in fact any sort of tussle with the elements are no compromise to their flawless being? To whom, in passing, a male friend might remark "She'd even look amazing in a bin bag"? Well, is it just me does Lana look like she's sporting the very look in question here, on her head? 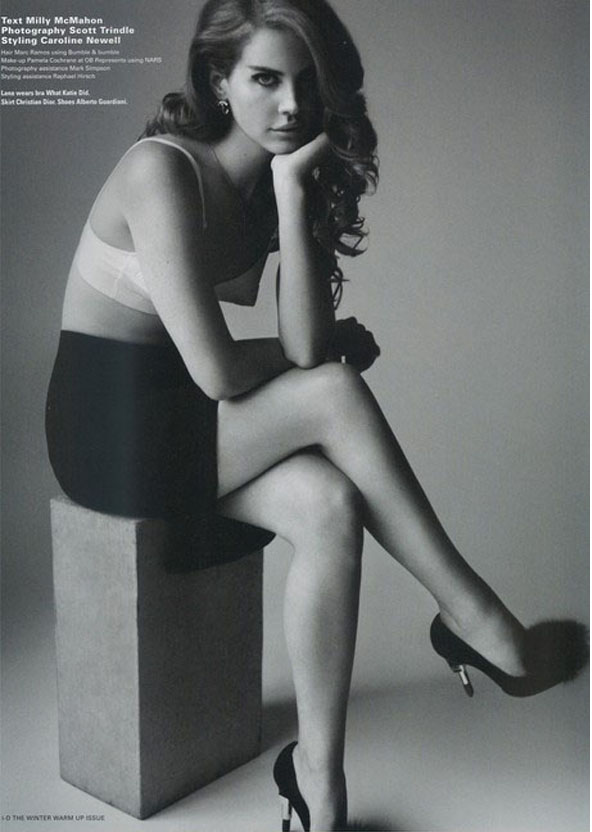 Of course, it's not a question of impossibly photogenic, so much as pure visual culture, darling! That headscarf, or whatever that unidentified abomination is, is actually part of a sartorial whole. Coupled with the smoky eyeliner and the demure mood set to black-and-white, it's a fine and delicate art in which paradigms from the 60s come together in a modern context to create a directional statement. Not many people I know can personally boast that!

The shoes are definitely a better call, from the del Rey school of capturing 60s-cool nostalgia. The surrealist overtones recall the golden age of youth culture. Think Andy Warhol's repeat prints, or perhaps the pop art printed shift dresses sold by graduates, Sally Tuffin and Marion Foale on Carnaby Street. Fashion, back then, as made with a disregard for couture's ivory tower status. As Mary Quant said, "Snobbery is out of fashion," (Fashion general ignorance: She didn't invent the mini skirt, fashion students did!) Cheap, novel fashion made by the young for the young took the place of watered down versions of film stars' and countesses' gowns. Okay, so this time around the paradigm has shifted back to square one, with me doing the copying. Granted, this coming season's looking more to the 90s than the 80s and 60s, though there are exceptions. It generally takes 2 decades for a phased-out trend to go from rubbish and passé to retro pastiche - probably because its new teen-market majority are too young to remember how dire it was the first time around!


Isopon car body filler (All will be revealed)

Flat box or palette for mixing

The body filler is acrid, very quick drying and takes a bit of getting used to. Planing also requires some practice.

About 2 and a half hours per shoe but most of that's spent waiting for layers to dry. 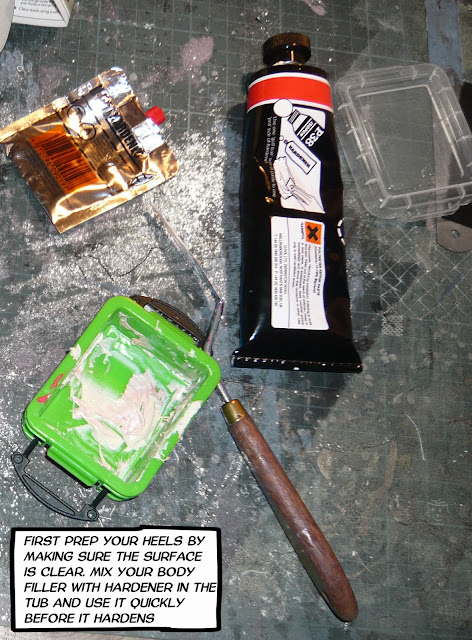 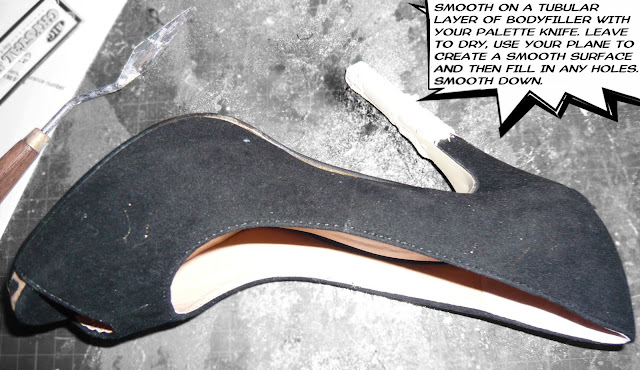 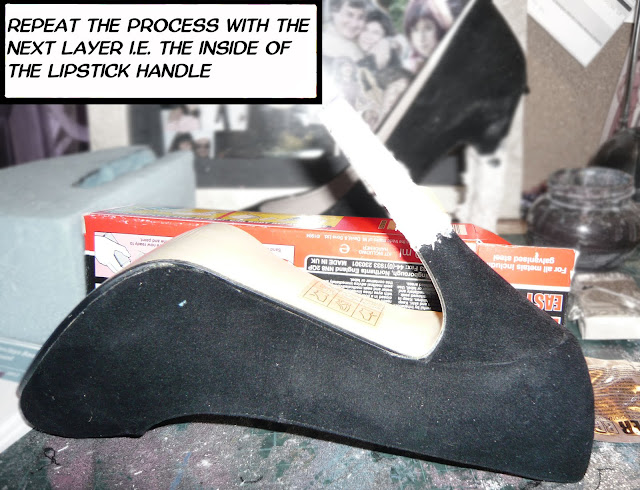 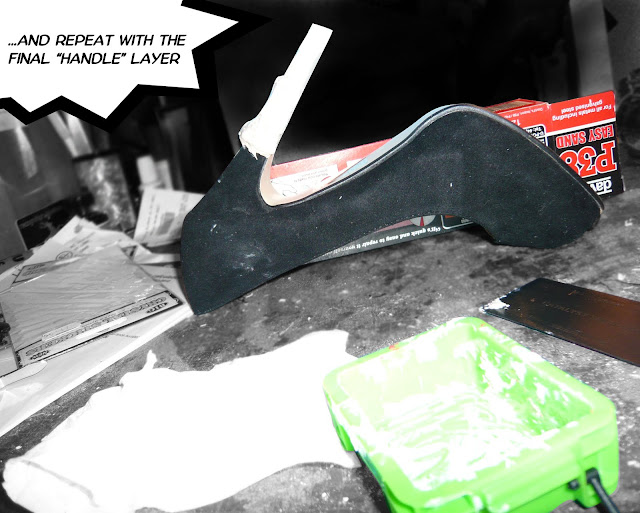 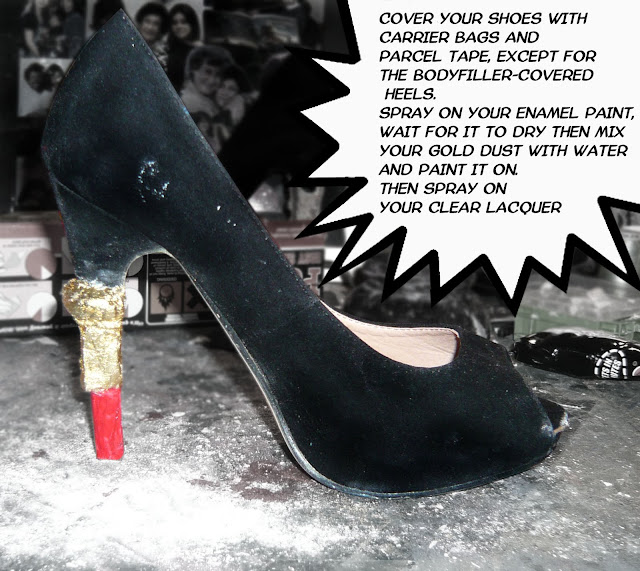 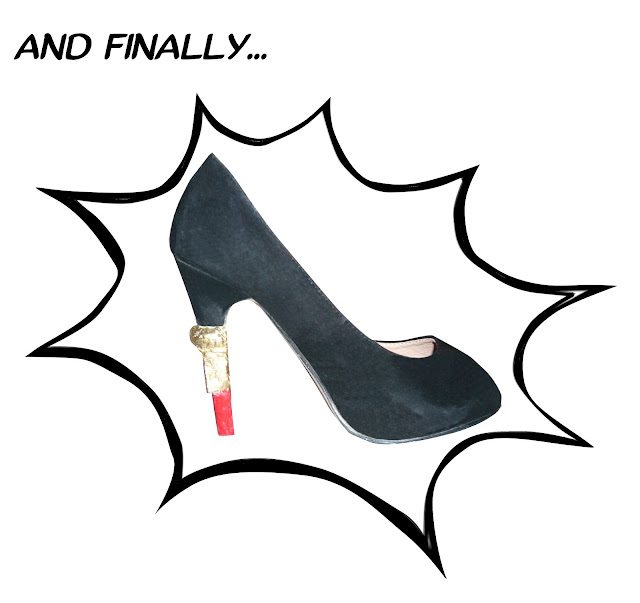 Posted by ChicCheatCharley at 13:19 2 comments: